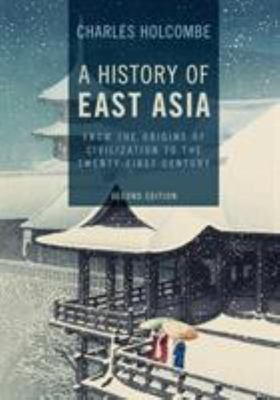 A History of East Asia: From the Origins of Civilization to the Twenty-First Century

Charles Holcombe begins by asking the question 'what is East Asia?' In the modern age, many of the features that made the region - now defined as including China, Japan, Korea and Vietnam - distinct have been submerged by the effects of revolution, politics or globalization. Yet, as an ancient civilization, the region had both an historical and cultural coherence. This shared past is at the heart of this ambitious book, which traces the story of East Asia from the dawn of history to the twenty-first century. The second edition has been imaginatively revised and expanded to place emphasis on cross-cultural interactions and connections, both within East Asia and beyond, with new material on Vietnam and modern pop culture. The second edition also features a Chinese character list, additional maps and new illustrations.

Charles Holcombe is Professor of History at the University of Northern Iowa. His publications include The Genesis of East Asia, 221 BC-AD 907 (2001) and In the Shadow of the Han: Literati Thought and Society at the Start of the Southern Dynasties (1994).

List of illustrations; List of maps; Pronunciation guide; Timeline; Glossary; Introduction: what is East Asia?; 1. The origins of civilization in East Asia; 2. The formative era; 3. The age of cosmopolitanism; 4. The creation of a community: China, Korea, and Japan (seventh-tenth centuries); 5. Mature independent trajectories (tenth-sixteenth centuries); 6. Early modern East Asia (sixteenth-eighteenth centuries); 7. Dai Viet (Vietnam before the nineteenth century); 8. The nineteenth-century encounter of civilizations; 9. The age of Westernization (1900-1929); 10. The Dark Valley (1930-1945); 11. Japan since 1945; 12. Korea since 1945; 13. Vietnam since 1945; 14. China since 1945; Afterword; Character list; Notes; Index.